You are here: Home / About / Chess Instructors & Coaches / Jennifer Shahade 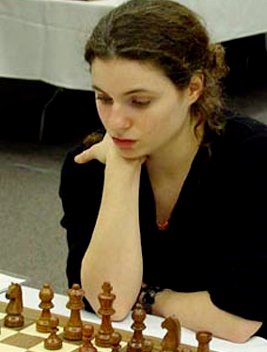 Jennifer was the U.S. Junior Open Champion in 1998. Last year at the US Championship in Seattle, Jennifer became the National Women’s Champion for the first time. In additional to the winning the prestigious National Championship, Jennifer also earned her first International Master Norm. Jennifer is only the second US woman in history to accomplish this level of excellence in chess competition. Jennifer secured her second IM and WGM norm in January 2003 when she tied for first among women at this year’s US Championship.

She has been teaching chess part time for the last four years for Chess in the Schools, a non-profit organization based in New York and has found teaching chess to enthusiastic students to be great fun. Jennifer’s outgoing personality and charms often makes her the fan’s favorite. With her recent accomplishments in the past few years, she is a true inspiration for boys and girls nationwide.